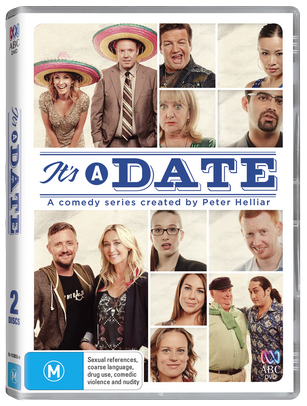 'IT'S A DATE is an eight part narrative comedy series which explores the tensions that erupt when two people get together and focus solely on each other. Each episode follows two self-contained dates which address dating questions such as, should you have sex on the first date? How important is a sense of humour? Should you go on first impressions? Written primarily by Peter Helliar, the series surprises with exciting combinations of talent and unexpected scenarios in which characters struggle to find love and/or affection.'

I love It’s A Date ! Creator Peter Helliar should be proud of the absolute gem he has created in this series, which I am sure will be marked in the history books as one of the all-time best Australian made comedy series’. A terrific concept for a television series that’s cast with some of the best known media personalities in the country, pretty much guaranteed Helliar success for this series even before it started airing!

Each episode features two different dates that surround a topic of the episode; for example, when should you abandon a date, do opposites attract, and how important is a sense of humour on a first date? These dates star an extraordinary mix of Australia’s most respected performers including Gold Logie winners Asher Keddie, Kate Ritchie, John Wood and Lisa McCune, as well as some of the best screen actors and comedians from around the country including Lawrence Mooney, Shane Jacobson, Ian Smith, Ross Noble and many more.

A had many favourite pairings throughout the series but my two favourite would definitely have to be larrikin John Wood paired with fast-mover Denise Scott, and the beyond hilarious Ron Jacobson paired with the frisky Jackie Kelleher. They all just click on screen; it seems as if there is no acting needed at all! And what’s produced from this is hilarity, especially in the case of Ron Jacobson who may just say some of the funniest things I’ve heard!

Also featured on this DVD release is a stack of bonus features including interviews with the cast, behind the scenes look at how it all came about, a set visit, and a fantastic short film created by Peter Helliar titled Christmas Clay (starring Dave Lawson, Marg Downey and a few other familiar faces).

Overall I really enjoyed this series and, as I said earlier, think it will go down as one of the best comedy programs the ABC has ever produced. Not only do I highly recommend you check it out, I DEMAND you to grab a copy and check it out for yourself…you won’t be disappointed!!