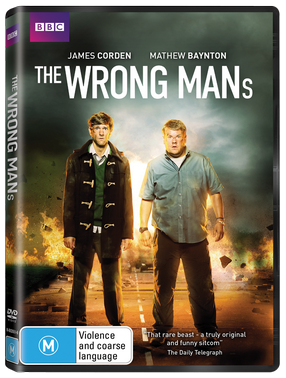 'Two lowly office workers are caught up in a deadly criminal conspiracy after discovering a ringing phone at the scene of a horrific car crash. Answering this phone turns their world upside down, as they realise it is up to them to step up and save the day. They are in the wrong place, at the wrong time, with the wrong skills. They are THE WRONG MANs.'

The BBC have struck gold in this highly entertaining comedy/drama series The Wrong Mans. It is something like I have never seen before, and something that is likely to never be beaten!

The plot of the series seems quite complex during the first episode or two, but as you become more and more encapsulated in the story then it becomes a breeze to understand. Sam Pinkett (played by Mathew Baynton) and Phil Bourne (played by James Corden), undistinguished Bracknell council co-workers, abruptly become entangled in a far-fetched – but deadly serious – web of crime, conspiracy and corruption after Sam answers a ringing phone at the site of a car crash.

Just by answering this phone call leads to an extraordinary adventure like no other. It is dramatic, action packed, funny, and down right entertaining! I "binged" on the six episodes of this program and honestly believe that it is the best way to watch it! With the entire show now available to buy on DVD, you too can have a binge on this awesome new series. And for even better news - it's been confirmed for a second series! I can't wait to see how they will continue following the lives of Sam and Phil.