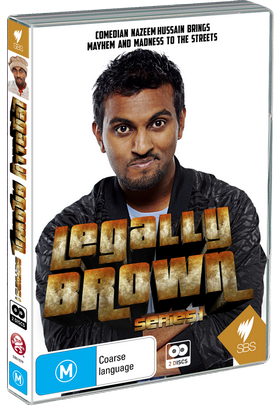 'Comedian Nazeem Hussain is host and star of Legally Brown, a daring new comedy series which pushes all the boundaries.   Before a pumped crowd of fans, Nazeem performs his unique brand of stand up to frame a series of socially relevant character and hidden camera stunts, as well as scripted comedy sketches.

This anarchic series parodies many aspects of Australian life, including race relations, politics and pop culture. Highlights include ‘Uncle Sam’, a taxi driver turned politician who is on the campaign trail make Australia Halal, ‘Imran Farook’, a TV mystic healer who uses unconventional techniques on his unsuspecting guests, and ‘The Prince of Mumbai’, who has travelled to Australia to find a wife!

Audiences will be privy to Nazeem, an outspoken Muslim whose parents emigrated from Sri Lanka to Australia, who is known for making fun of his own experiences growing up, as well as the white Australian population.'

It’s great to finally see comedian Nazeem Hussain get a full 10-part series of his own, and boy has he done a great job at it! Legally Brown reminds me a lot of the hit Australian recreation of the UK series Balls Of Steel, in which Hussain stars as a foreign news reporter attacking the public. This series extends this segment into ten half hour episodes with a variety of characters including Uncle Sam and the host of the fake television show ‘Spirit Time’.

Nazeem, with fellow comedian Aamer Rahman, in 2008 were recipients of the Melbourne International Comedy Festival (MICF) Best Newcomer Award for their hit debut self-titled show. They both entered Triple J's Raw Comedy and beat hundreds of other hopefuls to reach the Victorian State final. Fear Of A Brown Planet were the focus of an episode of 'Australian Story.' As well as standup, Rahman and Hussain have both written and performed for television.

The following is a brief outline of what you can expect to see throughout the first 5 of 10 episodes in this fantastic series:

EPISODE 2
Nazeem tests whether all brown people look the same, the Prince of Mumbai tries speed dating, a dancing lesson with a twist in ‘Flip World’, Uncle Sam unleashes another controversial policy, and we meet the world’s ‘cutest’ terrorist.

EPISODE 3
The Hollywood Arab teaches cooking, there’s a scandal in the Muslim Shore household, Imran Farook displays his psychic abilities in ‘Spirit Time’, the white intervention is enforced in ‘Flip World’, and Nazeem tackles antisocial behaviour in his latest experiment.

EPISODE 4
The Prince of Mumbai offers an indecent proposal, Nazeem tests out fake products in a focus group, the Indian Action Hero takes on a litterbug, Uncle Sam enters the republic debate, and Prince Harry meets the Natives.

EPISODE 5
Imran Farook offers his take on yoga in ‘Spirit Time’, we witness work place bullying in ‘Flip World’, the Prince of Mumbai tries to cast a wife, Nazeem is a charity collector without a cause, and we meet Prince Harry’s body double.

Comedy that discusses races and various cultures is very touch and go within society, and even more dangerous on TV. But Hussain’s series seems to get away with quite a bit that would be considered offensive in some cases. If you’ve enjoyed Fear Of A Brown Planet, works of ‘The Chaser’, Balls Of Steel  and the comedy of Dave Chappelle then you will definitely love this hilarious and unique series to death!