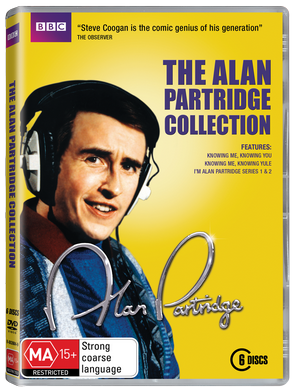 'For the first time on DVD in Australia - Steve Coogan's cringe worthy alter ego, chat show host Alan Partridge, in his three original BBC comedy series.  Alan Partridge, the chat show host from hell (or more precisely, Norwich) hit the TV screens with his own series in 1994 - and we still haven't stopped laughing. Aiming to "quite literally put the chat amongst the pigeons," Alan took on prime time TV - and lost, badly. As chat show host he is brash, cheesy and uncompromisingly narrow-minded.  Follow Alan across three hysterically funny series as he finds fame, loses it and tries desperately to climb back up the celebrity ladder.  Hailed as "the comic genius of his generation" by The Observer, this unrivalled Steve Coogan collection features over 3 hours of special features.'

Steve Coogan's cringeworthy alter ego Alan Partridge is finally here in Australia via DVD in this fantastic collection containing his three original BBC comedy series'. There's over 12 hours of material across the 6 discs of this collection that is sure to get the tastebuds of fans tingling!

Knowing Me, Knowing You
Alan Partridge launched on TV with his own chat show series in '94. Aiming to 'quite literally put the chat amongst the pigeons', as a chat show host he was brash, cheesy and uncompromisingly narrow-minded. Also includes the hilarious Christmas special entitled Knowing Me, Knowing Yule.

I'm Alan Partridge - Series 1
Since his chat show came to a catastrophic end, Alan Partridge has been rebuilding his career as an early morning DJ on Radio Norwish. With his loyal PA Lynn by his side, Alan prepares for his return to celebrity status.

I'm Alan Partridge - Series 2
Alan has 'bounced back'. He's got the third best slot on Radio Norwish, a military-based quiz on cable TV called Skirmish, a 33 year-old girlfriend called Sonja, an autobiography (Bouncing Back) and is only living in a caravan until his new house is finished...

The fans of Alan Partridge and Steve Coogan will rejoice after these long awaited series' are now finally available on DVD, in fantastic quality. The collection is a great introduction to the comedy works of Coogan and Partridge for those who have never seen his material before, which is how I went about it! Overall, this is a fantastic collection put out by Roadshow Entertainment that I highly recommend you check out. Definitely something for everyone!!

★★★☆☆
The Alan Partridge Collection can be purchased on DVD NOW!